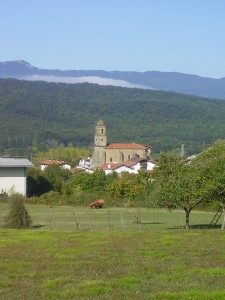 Bakaiku is a municipality of 340 inhabitants, situated in the geographical area called Mountain of Navarra.

Bakaiku is located in the foothills of the Sierra de Urbasa , surrounded by green meadows and dense forests of oak and beech , on northwest of Navarra , in the region of the Barranca ,the Sakana Valley, 44 km from the capital, Pamplona.

As the valley , the town is located in a natural and strategic corridor between Alava , Navarra and Gipuzcoa. This privileged location gives you an easy and quick access to Pamplona , Vitoria, San Sebastian , Bilbao and Bayonne or even Biarritz.

IN THE VILLAGE YOU CAN VISIT:

You can find out more about which cookies we are using or switch them off in settings.

This website uses cookies so that we can provide you with the best user experience possible. Cookie information is stored in your browser and performs functions such as recognising you when you return to our website and helping our team to understand which sections of the website you find most interesting and useful.

Strictly Necessary Cookie should be enabled at all times so that we can save your preferences for cookie settings.

If you disable this cookie, we will not be able to save your preferences. This means that every time you visit this website you will need to enable or disable cookies again.