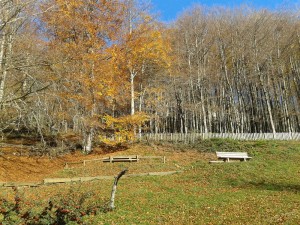 The Aralar mountain range is an extensive large area of 208 km2 beetween Gipuzkoa and Navarra. It is a large karstic massif with a varied landscape of rock grooves, hidden valleys, caves and chasms and another, more serene scenery, of evergreen meadows and beech woods that change their colour
in every season. It is one of the most important dolmen stations and also a focus of trekkers and mountaineering trips .

It is noteworthy the existence of the medieval Sanctuary of Saint Michael of Aralar (San Miguel in Excelsis) in the top of the mountains. It’s an emblematic place for Basque culture inside which the chains that – according to legend – were worn by Teodosio de Goñi as penitence for having killed his parents-in-law after being tricked by the Devil. He was freed after invoking San Miguel (St Michael) and thus defeating the dragon of Aralar.

Lizarrustiko Parketxea is the Interpretation Center of the Natural Park of the “Sierra de Aralar “. It’s 12 kilometers from Angoiko Etxea and is a good starting point to know the range.

You can find out more about which cookies we are using or switch them off in settings.

This website uses cookies so that we can provide you with the best user experience possible. Cookie information is stored in your browser and performs functions such as recognising you when you return to our website and helping our team to understand which sections of the website you find most interesting and useful.

Strictly Necessary Cookie should be enabled at all times so that we can save your preferences for cookie settings.

If you disable this cookie, we will not be able to save your preferences. This means that every time you visit this website you will need to enable or disable cookies again.